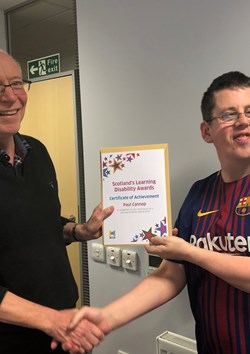 Paul is a former National TAG Chairperson and current member of SCLD's Board who is already well-known in Key for the huge contribution he makes to our work and that of TAG. So it is great to see the volunteering he also does for his local community being recognised by SCLD's Scottish Learning Disability Awards.

He received this in acknowledgement of his response to the terrible weather brought by 2018's 'Beast from the East'. He noticed that his neighbours, many of whom are older people, were struggling to get out and about so he contact his local council to see what could be done to help. He was told that resources were in short supply with the vital routes in the wider region being prioritised for gritting. Not satisfied to leave it at that, Paul asked what he could do to help.  And the answer to this question was… he could become a community snow warden, so that’s exactly what he did! The council provided Paul with the necessary equipment and visibility gear to enable him to do the job safely and he got to work helping his neighbours by gritting the pavements in his neighbourhood.